It’s no secret that I’ve attempted to start blogging several times over the years. As a result, my writing is in all different places and about all sorts of different things. I stumbled across this post from June 17, 2015 (almost a year to my first NYC moveaversary). It was a nice reminder that I’m here…not only living out my own dream but several others who wish to be in my shoes. I hate that it only takes a disgruntled subway passenger or an overpriced box of cereal to make me dislike NYC. I’m working on it though, I could learn a lesson or two from 2015 Anita wasn’t…

4 years ago today (June 17th, 2011), I visited NYC for the first time in my life. I remember anxiously taking the train from Stamford, CT wondering what would happen if I missed my stop, never thinking I’d spend 6 months commuting to and from work via that very same train. I remember my awe at Grand Central station, thinking how I could easily picture the Gossip Girl series in my head, never once thinking that it would be a source of frustration and anger rather than wonderment. And, perhaps most importantly, I remember that feeling when I stepped out of Grand Central and onto 42nd St…that rush of people, the shade from the tall buildings and the smell of the food carts. At that point in my life, actually living in NYC didn’t even seem like a possibility to me.

Granted, I was just a sophomore in college with few thoughts other than getting through college so I suppose it was normal that I was planning out my life. I just thought, my sense is of direction is abysmal…there is no way I could navigate the neighborhoods and streets of NYC, let alone the subway system. Another thought was that NYC is scarily big, one wrong turn and you could end up in a bad place. I thought the people moved too fast, it is too “corporate” and that there is no way I could afford it. Plus, San Diego has always been my end goal without a doubt. 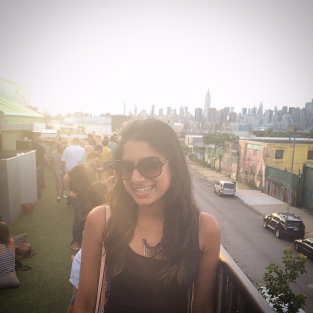 4 years later, here I am being that typical Manhattanite. I run around Manhattan in heels, with a coffee in one hand and my bag in the other. I get frustrated with the subway, not because I can’t figure it out, but because it’s delayed or too crowded. I have walked from the East River to the Hudson. I avoid Times Square, Herald Square, Union Square and other touristy places. I’ve learned the lingo of apartment hunting in NY (the terms cozy, walk-up, railroad-style, converted bedroom). I think I’ve also developed a thicker skin (it’s hard not to when random strangers curse and yell at you when you’re walking).

I cannot believe that I have lived here for almost one year (July 3rd). I sometimes forget how lucky I am that I can say I have my dream job in NYC. I work in the Chrysler building…I pass the Empire State Building every day. I still get those moments of awe when I just look up, and around. How did this happen?!

I know I’ll end up in San Diego but the ride has been fun so far. I’ll be making some Moveaversary Resolutions that will consist of my NYC bucket list and other goals I want to accomplish before I move again. I think this is the only way to ensure I take full advantage of what NYC has to offer…but oh my gosh, I’m in New York City. I live in New York City.